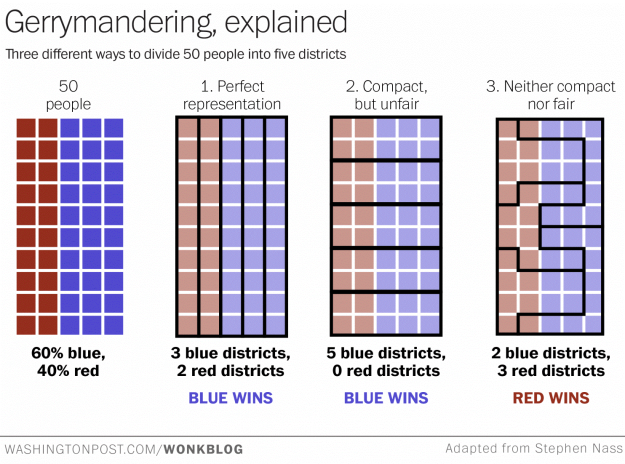 Gerrymandering is the process of redrawing political boundary lines to give a party a numerical advantage over its opponents. Imagine, there was a hypothetical state called ‘New Devonshire’ of 50 people, as represented above. To start with 30 are Democrats and 20 are Republicans. Luckily, in this state, all the Republicans live in one area and all the Democrats live in another!

Now, states must be divided into districts. This is what allows elections to the House of Representatives and state legislatures to take place. In New Devonshire there are 5 districts. As the parties are defined clearly in the district by where they live there can be perfect proportional representation, as shown in Grid 1. This is what the Founding Fathers intended when drawing up how elections to Congress would work. Now, imagine that the Democrats control the State Government, and are therefore in control of drawing electoral districts. They decide to draw the boundary lines horizontally.  Despite the same number of voters, the Democrats now win in every single district, meaning they have 5 representatives in Congress to zero from the Republicans. This does happen in reality too. In New York in the 2012 election the Democrats received 66% of the popular state-wide vote in the House Elections. However, they won 21 out of 27 available seats, or 77% of the seats available.

Now let’s imagine that New Devonshire is controlled by the Republicans. They know they are at a numeric disadvantage, so redraw the boundaries.  They slice up the state in such a way that despite having only 40% of the vote they win 60% of the seats. This is shown in Grid 3. This is similar to a situation that occurred in Pennsylvania in the House elections of 2012. The Democrats won 51% of the popular vote by only one 5 out of 18 House seats. This was largely because the Republican state government redrew the state’s electoral boundaries, making some extremely irregular.

The Pennsylvania 7th, is another gerrymandered district

New Devonshire is obviously a simplified hypothetical example; however, Gerrymandering is a consistent problem facing the American electoral system.

The term Gerrymanding was first used in the Boston Gazette in March 1812. The word was created whilst commenting on the redrawing of the state election districts by Massachusetts Governor, Elbridge Gerry. The new electoral districting was said to resemble a salamander, which is where the name Gerrymandering, derived from a ‘salamander’ and ‘Berry’ came from.

So, why is a system which is so fundamentally unfair, and even corrupt, allowed to continue? The answer is really remarkably simple – to change it the majority party in a state would have to be willing to legislate against it. This would be the same majority party that can benefit so much from using their majority to gerrymander the districts to favour them in the future. It is the ultimate political catch-22 situation.

1 thought on “What is Gerrymandering?”