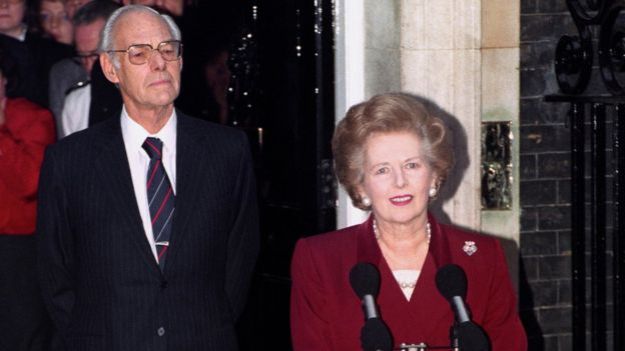 On the 22nd November 1990, Margaret Thatcher resigned as leader of the Conservative Party and Prime Minister. This ended the eleven years of her premiership.

Margaret Thatcher became Prime Minister in 1979, after Labour Leader Jim Callaghan was removed via a vote of no-confidence by 311-310. A General Election took place, which the Conservatives won with a majority of 43 seats. During the eleven years she was Prime Minister, she redefined the nation, perhaps more than any Prime Minister since Clement Attlee (1945-1951). She took on the unions during the Miner’s Strike, defeated huge odds to win back control of the Falkland Islands from Argentina and redirected the British economy away from socialism and towards free enterprise.

However, Thatcher was an extremely divisive figure. Her introduction of the Poll Tax (a flat rate tax on all citizens) in 1989 led to mass protests and riots. In addition, the issue of Europe was creating ruptures in the Conservative Party. Despite being pro-European at the start of her premiership she was increasingly sceptical about the direction that the European Economic Community was taking, particularly as the EEC began to have a greater influence on social affairs.

From 1989, Margaret Thatcher was under increasing pressure and had a dangersous polling statistic for any PM– she was less popular in the opinion polls than her party. This led to attempts to oust her from power. The first notable attempt came from Sir Anthony Meyer in 1989. At the time, Meyer was a little known backbench MP. However, he challenged Thatcher to the leadership of the party in 1989. He was decisively beaten, by 314 to 33. However, it did show that there was discontent in the party.

Things again came to a crunch in November 1990. Sir Geoffrey Howe, a man traditionally defined by his loyalty, resigned as Deputy Prime Minister. Howe had resigned because Thatcher had not agreed to a clear plan for Britain to join the European Exchange Rate Mechanism. Howe was the last member of Thatcher’s 1979 Cabinet and his resignation came as a bitter blow. In resigning, he gave the following withering put down in the House of Commons: 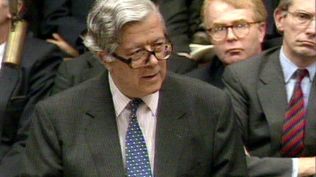 “It is rather like sending your opening batsmen to the crease only for them to find, the moment the first balls are bowled, that their bats have been broken before the game by the team captain.”

Two weeks later, Michael Heseltine launched a challenge for the leadership. On the first ballot Thatcher won by 204 votes to 152, however, this was enough to force a second ballot. She was four votes short of winning outright. Although Thatcher said she would fight on – she decided instead to resign – largely on the urging of her own cabinet. She was replaced as party leader and Prime Minister by John Major, who then went on to defeat Michael Heseltine for the leadership. Major went on to win a majority in the 1992 General Election, remaining Prime Minister until Labour’s Landslide victory in 1997.

This is a very good example of Britain’s parliamentary system. It is not only via a defeat in a General Election that a Prime Minister can be removed from office. By convention the Prime Minister is the person who leads a party with a parliamentary majority. If the leader of that party is defeated in a party leadership election, they will no longer be able to continue as Prime Minister. Indeed, with Theresa May under increasing pressure, there is a chance that she will go the same way as Margaret Thatcher forced out not by the electorate, but by backstairs intrigues within her own party.